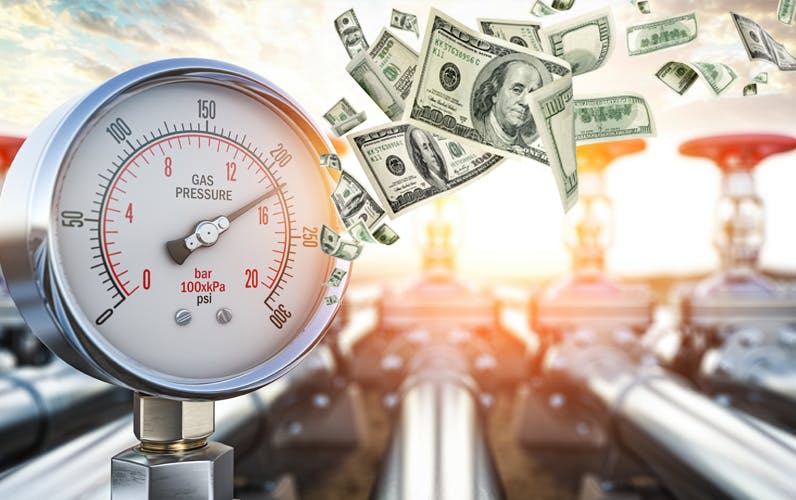 Natural gas prices have spiked around the globe in recent months. The October natural gas NYMEX futures contract closed at $5.841 per MMBtu which represents a whopping 178% increase from last October’s close of $2.101. Electricity prices have also risen sharply as many power plants are natural gas fired, creating a broad energy price increase across all sectors.

Industrial Energy Consumers of America, a trade group representing chemical, food and materials manufacturers, has called on the US Department of Energy to halt exports of liquefied natural gas (LNG) to help keep costs down for the industry.

This sharp rise in price is due to many factors, a few of which include increased demand in a post pandemic recovery, low gas inventories and tighter than usual supplies from countries such as Russia. Gas prices in Europe have risen more than 250% this year while Asia has seen about a 175% increase

Steel producers, cement makers, fertilizer manufacturers and food production companies rely heavily on natural gas as part of their manufacturing processes. The food industry is dealing with a shortage of carbon dioxide (CO2) caused by the suspension of production in fertilizer plants. Uses for CO2 include vacuum sealing food products to extend shelf life as well as providing the “fizz” in soft drinks and beer – just to name a few.

Soaring gas prices have forced many companies to halt natural gas based processes to avoid losses. Yara International, a Norway based company and one of the world’s largest fertilizer makers, announced it would cut production by 40% due to high gas costs. The British Government has asked US based CF Industries to restart the production of CO2. Britain’s environmental minister has warned the food industry that the cost of CO2 will rise sharply and could have serious negative effects on supply chains.

Spain has acted to protect consumers from soaring energy bills by introducing legislative measures that include price caps. China is reducing production of heavy industries, fertilizers, cement, chemicals and aluminum – a move some analysts say will cut exports and further disrupt supply chains.

Where do we go from here? Based on US policies toward fossil fuels, we can expect to see prices continue to rise. New pipeline projects are practically a thing of the past and many existing ones have been halted. Rig counts and inventories are down. Ironically, the attack on natural gas is forcing industries and countries outside of the US to move toward oil and coal as a more cost-effective alternative. This is diametrically opposed to the global effort to reduce greenhouse gas emissions and combat climate change. Welcome to the new normal.

Natalya Berdzeni joined CCM in 2005 and currently serves as President. Natalya has served in many critical roles and transitions at CCM. She oversees operations and client development, including the execution of spend programs and their operational support, with responsibility for the company’s financial growth and profitability.